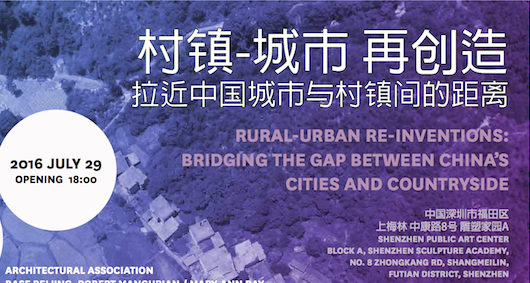 Shenzhen, July 1, 2016__The American Academy in China (AAC) is organising an exhibition and a symposium in Shenzhen that examine one of the critical issues facing China today—the changing relationship between the country’s expanding cities and declining villages. Entitled “Rural-Urban Re-inventions: Bridging the Gap Between China’s Cities and Countryside,” the events will bring together work done by a broad range of architects, academics, businesspeople, and thinkers from around the world.

“Although more than half of China’s population still lives in rural villages, younger generations are migrating in huge numbers to major cities, seeking economic opportunities,” says Clifford Pearson, AAC director. As a result, cities are forced to cope with severe pressures on their housing and economic infrastructures, while villages look for new economic and social models to sustain declining numbers of residents. Schools of architecture and research-based design firms are currently exploring new models of sustainable development, as well as new architectural prototypes that can be employed in rural areas. “Our exhibition and symposium will show some of the innovative approaches designers are using to tackle the twin challenges facing China’s metropolitan and rural areas,” adds Pearson.

Established under the auspices of USC’s School of Architecture, the American Academy in China strives to create cross-cultural collaboration between the United States and China by promoting dialogue around design, the built environment, and the arts.