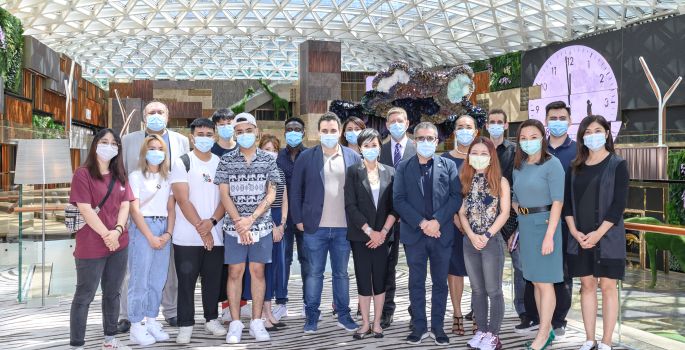 On 29 June 2020, at 2:30 pm, MGM/USJ Spectacle workshop outcome presentation was held at MGM Cotai Spectacle area. MGM Cotai Spectacle has an area with 25 LED large screens that are permanently displaying several video art pieces. This is an annual event which officially launched the videos as well as the ones from this year’s edition. MGM offered the students of the Faculty of Creative Industries (FCI) of the University of Saint Joseph (USJ) the opportunity to create content for this digital canvas. The students from both editions and the representatives from MGM Cotai and USJ were present.

Applications for these workshops were opened to all FCI students of Communication and Media and Digital Cinema programmes. A team of 5 different students was selected each year based on their skills and motivation and then worked on the concept, design, shoot, and post-production of these videos.

The first workshop in 2019 resulted in 5 sequences that were displayed in different screens that interacted with each other of real-sized people trying to solve fictional mal-functions of the panels.

The second workshop in 2020 resulted in 24 videos to mark the different hours of the day, each one using a different technique, from time-lapse to stop-motion, animation and green-screen, etc.