Public Lecture: From the Red Sea to the Red Planet and Beyond: Exploring the limits of Life

On 31 October 2019, USJ’s Institute of Science and Environment is organising a Public Lecture titled “From the Red Sea to the Red Planet and Beyond: Exploring the limits of Life” by Prof. André Antunes. 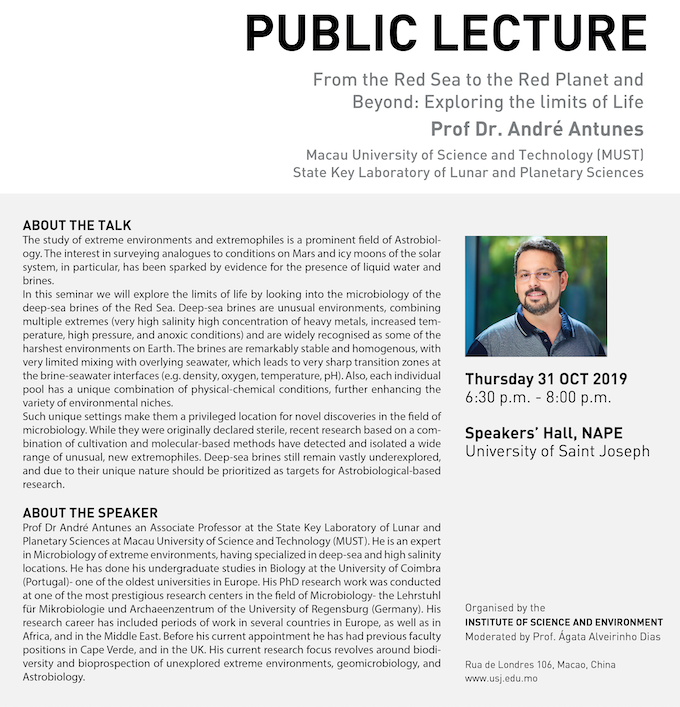 The study of extreme environments and extremophiles is a prominent field of Astrobiology. The interest in surveying analogues to conditions on Mars and icy moons of the solar system, in particular, has been sparked by evidence for the presence of liquid water and brines.

In this seminar we will explore the limits of life by looking into the microbiology of the deep-sea brines of the Red Sea. Deep-sea brines are unusual environments, combining multiple extremes (very high salinity high concentration of heavy metals, increased temperature, high pressure, and anoxic conditions) and are widely recognised as some of the harshest environments on Earth. The brines are remarkably stable and homogenous, with very limited mixing with overlying seawater, which leads to very sharp transition zones at the brine-seawater interfaces (e.g. density, oxygen, temperature, pH). Also, each individual pool has a unique combination of physical-chemical conditions, further enhancing the variety of environmental niches.

Such unique settings make them a privileged location for novel discoveries in the field of microbiology. While they were originally declared sterile, recent research based on a combination of cultivation and molecular-based methods have detected and isolated a wide range of unusual, new extremophiles. Deep-sea brines still remain vastly underexplored, and due to their unique nature should be prioritized as targets for Astrobiological-based research.

Prof Dr André Antunes an Associate Professor at the State Key Laboratory of Lunar and Planetary Sciences at Macau University of Science and Technology (MUST). He is an expert in Microbiology of extreme environments, having specialized in deep-sea and high salinity locations. He has done his undergraduate studies in Biology at the University of Coimbra (Portugal)- one of the oldest universities in Europe. His PhD research work was conducted at one of the most prestigious research centers in the field of Microbiology- the Lehrstuhl für Mikrobiologie und Archaeenzentrum of the University of Regensburg (Germany). His research career has included periods of work in several countries in Europe, as well as in Africa, and in the Middle East. Before his current appointment he has had previous faculty positions in Cape Verde, and in the UK. His current research focus revolves around biodiversity and bioprospection of unexplored extreme environments, geomicrobiology, and Astrobiology.