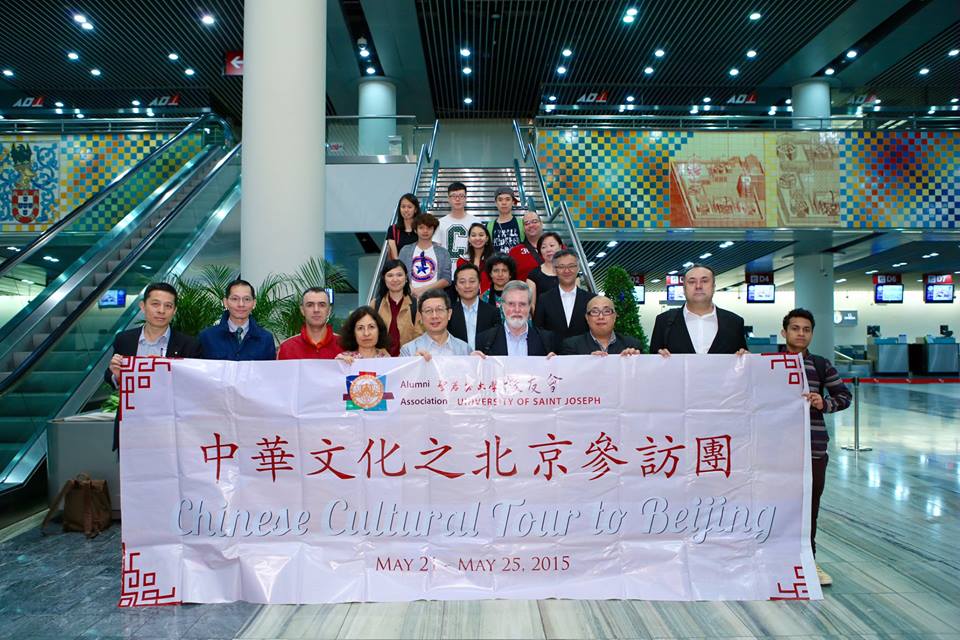 USJ Delegation of faculty and alumni visited State Administration for Religious Affairs, Ministry of Education, Beijing Normal University and Beijing Foreign Studies University from 21 to 25 May.

In the morning of 22 May 2015, a six-member delegation from the University of Saint Joseph, headed by USJ’s Rector, Fr. Peter Stilwell, visited the State Administration for Religious Affairs (SARA) in Beijing and was warmly welcomed by Vice Minister, Chen Zongrong and others of SARA. The host and guests held a meeting for discussion. Other USJ delegates included Pro-Rector, Prof. Vincent Cheng Yang, the Dean of Faculty of Administration and Leadership, Prof. José Alves, and the Dean of Faculty of Psychology and Education, Prof. Ana Correia. The delegation also included USJ Alumni Association’s Vice Chairman of General Assembly, Benjamin Yue, and Vice President of the Executive Committee, Addy Chan. During the meeting, conducted in a friendly atmosphere, USJ’s Rector introduced the long history and roles of the Catholic Church in developing education in Macao. He presented the characteristics of USJ, such as its internationalized faculties and all-English teaching programs, as well as the support USJ has received from the Macao S.A.R. government. The Pro-Rector then introduced the various regulatory systems recently introduced in USJ, which reflect the rigorous, systematic and fair principles of the university.

Minister Chen carefully listened to the introductions and expressed that USJ is a bridge for cultural exchanges between China and the West, especially in opening up exchanges with the Catholic Church. He also acknowledged the success of USJ since the opening of the university, and affirmed the values of equality, harmony and order in managing the university. Minister Chen expressed his wish to strengthen academic exchanges and research collaboration between the State Administration for Religious Affairs and USJ under the principles of mutual respect, non-interference and non-subordination. He wishes the continuous success of USJ.

In the afternoon, the USJ delegation visited the Ministry of Education, and was received by the Executive Deputy Director of the Ministry’s Office of HK-Macao-Taiwan Affairs, Zhao Lingshan. During the meeting, the Rector and Pro-Rector of USJ presented the characteristic features of USJ and the development of the new campus, of which the officials from the Ministry of Education present at the meeting showed great interest. Deputy Director Zhao expressed that USJ is one of the tertiary institutes of Macao and so also of China, and the Ministry cares about and is happy to see its development. He also commented that the higher education institutions in Macao and the Mainland are developing closer cooperation, with many faculty members and students in Macao participating in various exchange activities in the Mainland every year, adding that the Ministry of Education welcomes USJ to develop more exchange and cooperation with the Mainland, and will closely study USJ’s dev During May 21-25, a 20-member USJ group led by the Rector also visited Beijing Normal University and Beijing Foreign Studies University. They participated in a series of round-table discussions with the faculties and students of these two famous universities. The group spent the weekend touring the Great Wall and the National Museum. Students who participated in these activities were able to better understand the rapid growth of higher education in the mainland and appreciate the rich history of Chinese civilization.

USJ expressed their gratitude to the Liaison Office of the Central People’s Government in Macao S.A.R. for arranging this trip to Beijing, and the Beijing Office of the Liaison Office for accompanying the delegation during the visits. The host Beijing Normal University provided very generous and considerate assistance to the delegation. The Bank of China Macao Branch is also acknowledged for its sponsorship to the visit.