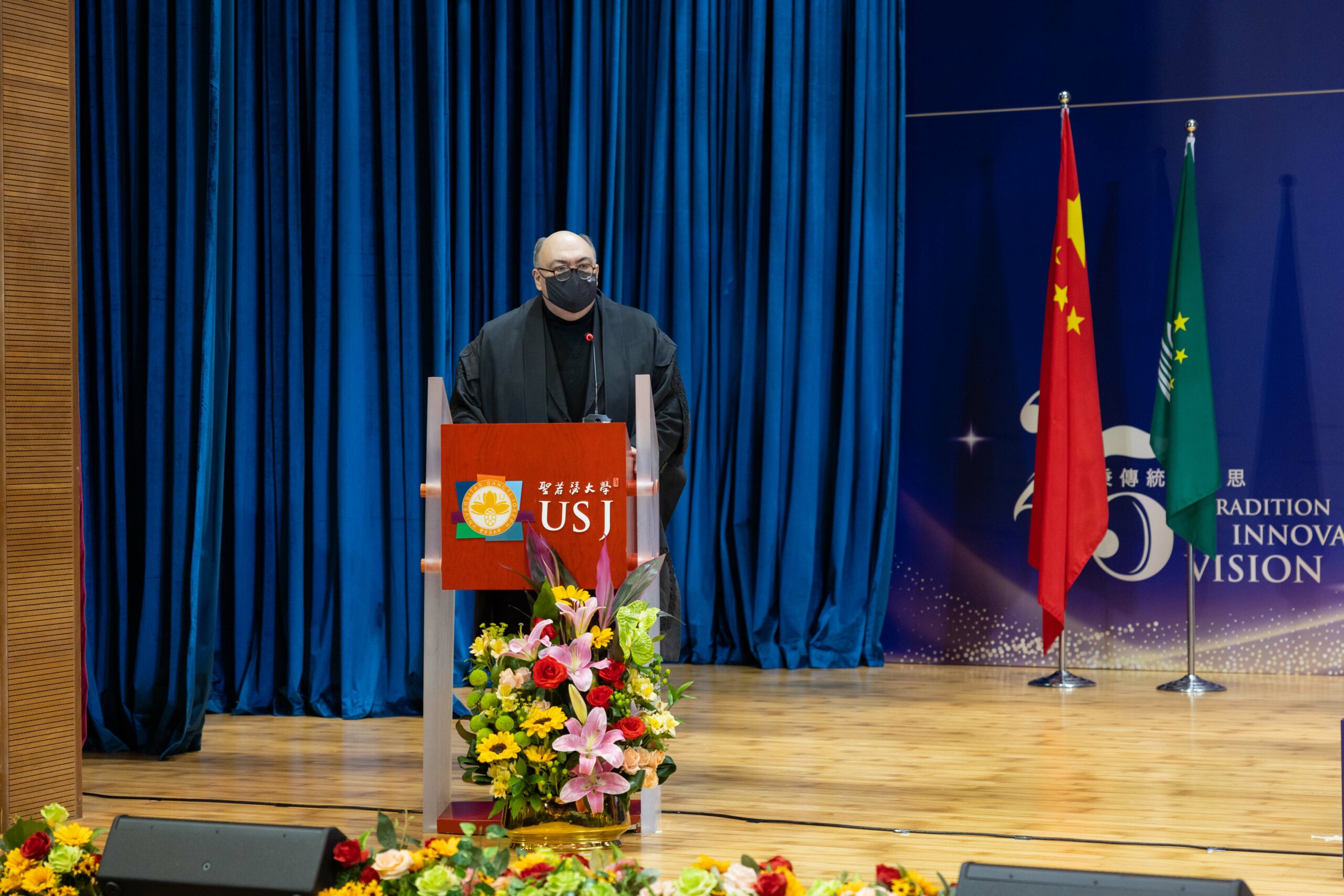 Address by Rev. Prof. Stephen Morgan, Rector of USJ, on the occasion of the 25th Anniversary, Silver Jubilee celebrations.

Twenty five years ago, in the run up to the return of Macao to Chinese Administration a partnership between the Central People’s Government, the Diocese of Macao, the Catholic University of Portugal and the Macao authorities took a courageous step that indicated faith in the future of Macao as a Special Administrative Region of China, by establishing the Inter University Institute of Macau, which, in 2009 changed its name to the University of Saint Joseph.

The quarter of a century since its foundation has seen the University benefit from the generous and committed oversight of three Bishops of Macao and with the support of the three Chief Executives – we are particularly glad to welcome the first of those Chief Executives, the Honorable Mr Edmund Ho Hau Wah here today. His support was essential in securing the possibility of a new Green Campus for the University, here at Ilha Verde. Thank you, Mr Ho.

The support of the Macao Government continues and the last year has seen a concerted effort on our behalf by the Secretary for Social Affairs and Culture, the Honorable Ms Ao Ieong U, who, together with our present Chief Executive, the Honorable Mr Ho Yat Seng, and ably supported by the Director, Deputy Director and staff of the Department for Education and Youth Development, and by both the Liaison Office of the Central People’s Government and by the Commission of the Ministry of Foreign Affairs, which has finally opened up for us the possibility of recruiting students from Mainland China. My thanks and those of all at USJ, especially to you, Ms Ao Ieong U, and I know you will pass those thanks to the Chief Executive. Mention must also be made of the Macao Foundation and the Foundation for Science and Technology who have, across the years, provided such valuable financial support.

All Catholic Universities are born ex corde ecclesiae, out of the heart of the Church. USJ’s very identity is given to us by the Church as a place of witness and service to Macao and to China. We are, therefore, full of the deepest gratitude to the late Bishop Domingos Lam, to Bishop José Lai and now to our Chancellor Bishop Stephen Lee Bun-sang, together with the Catholic Foundation for Higher Education and the Catholic University of Portugal for tirelessly supporting our work.

As we mark our 25th anniversary, we look forward to the next 25 years, we are called to reflect upon what it is to be a Catholic university, a international university, what it is to be a university in, of, and for Macao, in, of, and for China. What we can know with some degree of certainty that this future will be intimately tied up with the development of Macao, with the development of the Greater Bay Area and with the development of China. In this context, USJ is called to be a part of Macao’s future as a world centre of tourism and leisure, an economic and trade cooperation platform for China and Portuguese-speaking countries, and a base for harmonious cultural exchange and cooperation. Today we commit ourselves to that vision. 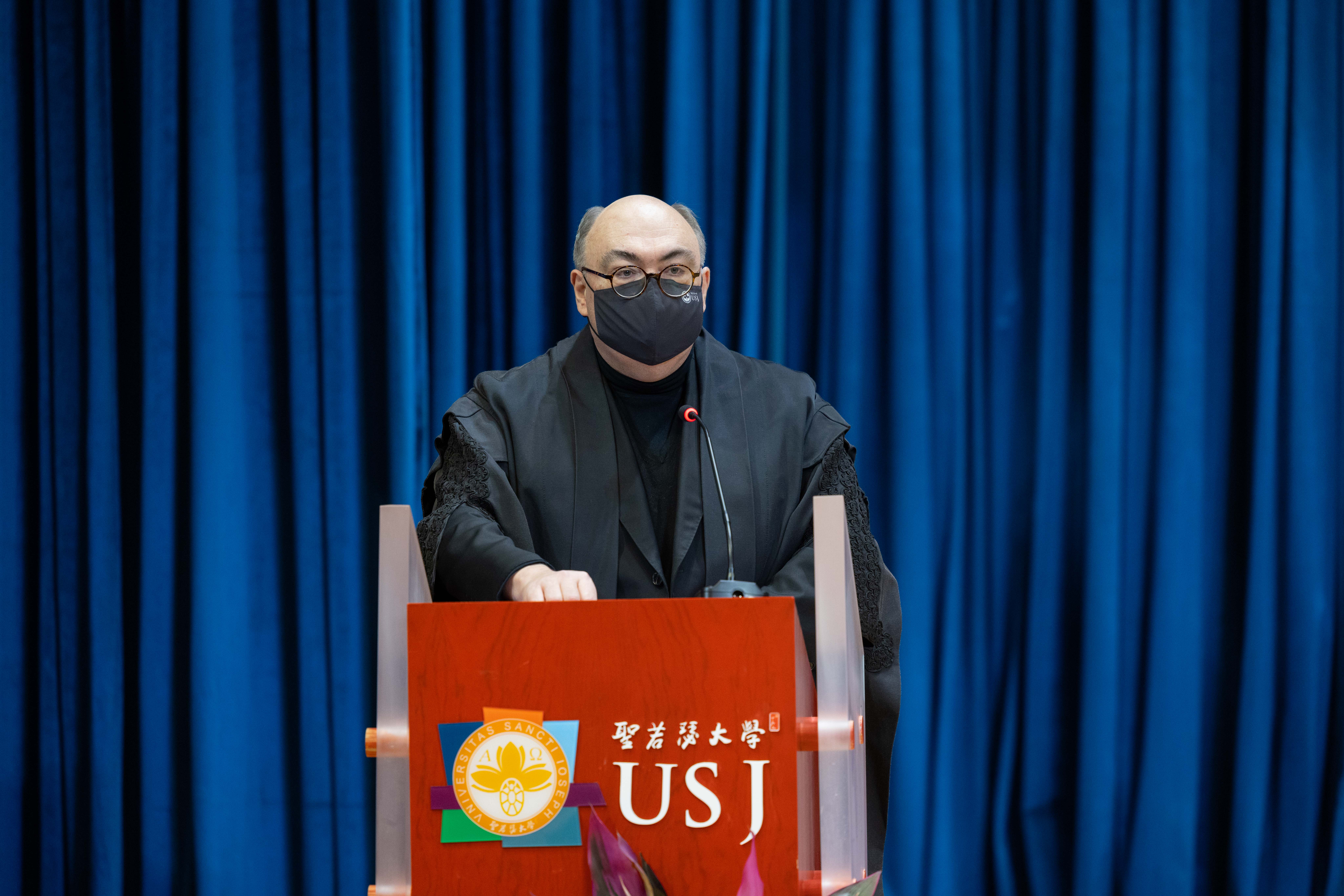