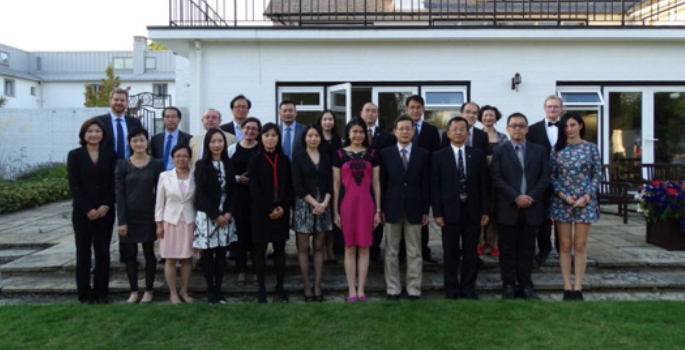 In August 2-9, Pro-Rector Vincent Yang joined 19 professors from 5 other local universities and colleges in a one-week visit to Cambridge University. The professors were chosen by GAES through a competitive selection process to attend a training and exchange program delivered by Selwyn College and the UK-China Development Center in England. The group attended a series of seminars to discuss global trend and internationalization of higher education, interactive teaching, inter-disciplinary research, and university funding and management strategies.  The group also visited several faculties and colleges in Cambridge University, Oxford and London. In addition, Prof. Yang met with senior professors of the Cambridge law faculty which hosted him when he was a visiting scholar in the 1980s. Cambridge is ranked a world top 5 university. The University has 91 Nobel Prize laureates and admits “straight A” students internationally. In the past 100 years, many Chinese students and scholars received education at Cambridge. On August 7, Cambridge held a celebration to honor the famous Chinese poet Xu Zhimo, who attended the university three times in the 1920s. His poem “Goodbye Again, Cambridge” is taught in all high schools in both mainland China and Taiwan. In his speech at the closing ceremony of the visit in Cambridge, Prof Yang proposed to the host that Macau and Cambridge should develop a closer relationship to support the development of higher education in Macau.