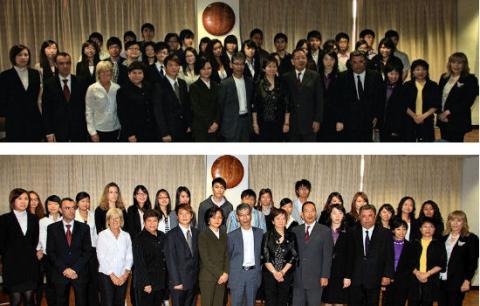 USJ Press Release, October 28, 2010 – 48 under-graduate students of the University of Saint Joseph were awarded grants of up to 21.000 patacas each to help them pursue their studies. The USJ Scholarship Award ceremony took place today October 28, at 12 noon, in the university Auditorium.

USJ Press Release, October 28, 2010 – 48 under-graduate students of the University of Saint Joseph were awarded grants of up to 21.000 patacas each to help them pursue their studies. The USJ Scholarship Award ceremony took place today October 28, at 12 noon, in the university Auditorium.

In the event, two types of Scholarships were distributed: the USJ Community Scholarships, donated by 14 prominent local institutions and individuals, were awarded to 28 students with outstanding academic performance, and the USJ Scholarships – granted to 20 students based on their financial situation. In both cases, USJ Scholarships’ philosophy aims fundamentally to support young students from families with low household incomes.
HE D. José Lai, Bishop of Macau, Macau Foundation, SAFP, CPTTM, Leng Fung Charity Association, the Venetian Cotai Limited, BNU, Henry Fok Foundation, International Ladies Club of Macau, CEM, CTM, Ms Jenny Kong, the Macau Tower Entertainment and Convention Center and Seng San Enterprises Ltd are the sponsors currently involved in the Community Scholarships program. The USJ Community Scholarships vary between 3.000 to 20.000 patacas and were awarded to 28 students in need of financial support, according to the criteria established by the Scholarship Committee – in a total value of 298,000 patacas.
Professor Isabel Morais, Vice-rector for Student Affairs, said that “Last year the University of Saint Joseph has solely awarded more than Mop 1,908,250 in scholarships which represented three percent of USJ total budget. However, especially in this uncertain global economic environment, it becomes even more significant for a private university like ours that corporate and charitable organizations and other generous donors come forward and help USJ to respond to the needs of our students and their families.
“We would like to proudly announce that this year there was an increase of the number of community scholarships in more than 133% and an increase of more than 75% in the amount awarded thanks to the generosity of our generous donors. These figures are clear assertion that our current and new scholarship donors believe that Macau’s long-term economic development is not only an investment and pledge in higher education but also a sign that they share the University of Saint Joseph’s vision that education is about combining human values and academic excellence,” emphasised Professor Morais.
The USJ Vice-rector is hopeful that in the years to come the University of Saint Joseph can gather the involvement and support of even more companies and institutions to the program.
The University of Saint Joseph Scholarships are granted every academic year.