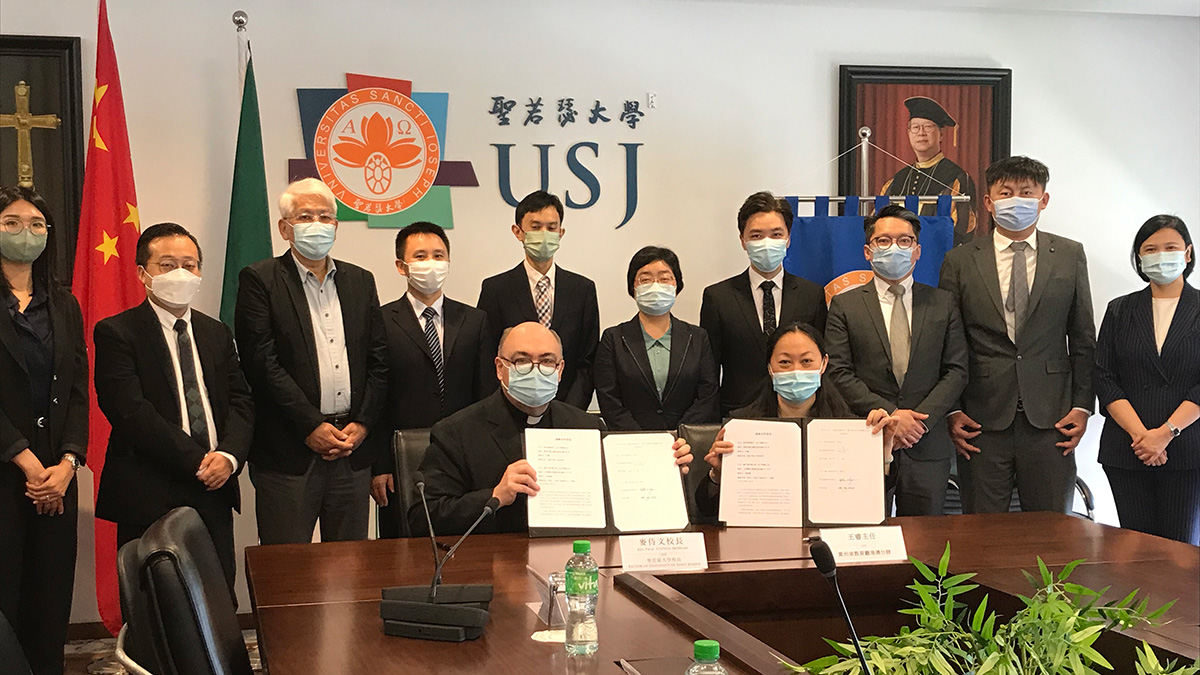 Ms. Liu Rui, Vice Minister of the United Front Work Department of the Guizhou Provincial CPC Committee, visited the Ilha Verde Campus of the University of Saint Joseph (USJ), and attended the signing ceremony of a memorandum of strategic cooperation with the management and department heads of USJ.

In the afternoon of 18 May, Vice Minister Liu Rui of the United Front Work Department of the Guizhou Provincial CPC Committee visited the Ilha Verde Campus of the University of Saint Joseph (USJ). Ms. Wang Rui, Director of Office for Hong Kong, Macao and Taiwan Affairs of the Department of Education of Guizhou Province, and Rector Stephen Morgan of USJ entered into a strategic cooperation agreement in the presence of Vice Rector Zhang Shuguang, Vice-Chairman Chan Kuai Son of Our Committees, Director Teresa Loong of Office for Student and Alumni Affairs, Director Lam Pui Ieng of Office for Continuing Education and staff of USJ.

Led by Director Teresa Loong of Office for Student and Alumni Affairs, the delegation from the United Front Work Department of the Guizhou Provincial CPC Committee visited the library, student activity center, residential hall, audio-visual production, design and fabrication laboratories and the newly completed laboratory of applied neurosciences of USJ. The tour was followed by the signing ceremony of a strategic cooperation agreement with the management and department heads of USJ. In order to expand the effectiveness of the cooperation channels, the Macao Voice Raising Association acted as an associate coordinator for the aforesaid business and helped to facilitate the implementation of specific projects.

At the meeting, Rector Stephen Morgan welcomed the visit of the United Front Work Department of the Guizhou Provincial CPC Committee and the delegation, mentioning that USJ is a highly international institution with the faculty from more than 70 countries and regions around the world, and expressed his expectation for more links and cooperation with universities and organizations from Mainland in the future, so that more students can receive international education at USJ. Vice Rector Zhang Shuguang introduced USJ’s historical background, which is based on the close cooperation with Portuguese-speaking countries, making it one of the leading universities among the traditional international universities and playing an important role in the “Belt and Road” and “China-Portugal Economic and Trade Exchange Platform”. Therefore, USJ has always taught its students positive and open-minded values in the humanities and social development. In addition, USJ also focuses on the arts and teacher training. Currently, most of the teachers in more than 80 non-tertiary institutions in Macao are graduates of USJ. USJ also emphasizes the development of intelligent technology and the environment by offering Bachelor’s and Master’s degree programmes, and continues to focus on issues of concern to the Macao community, such as the application of big data and smart heath care, so as to deepen research and development in this field. Vice Rector Zhang said that USJ was honored to have the support of the Ministry of Education of the People’s Republic of China to start a trial of recruiting students from mainland this year, and hoped to have more in-depth exchanges and cooperation with Mainland in the future. Based on USJ’s teaching characteristics and the unique cultural heritage of Guizhou, they expect to develop a series of talent training and exchange programmes. 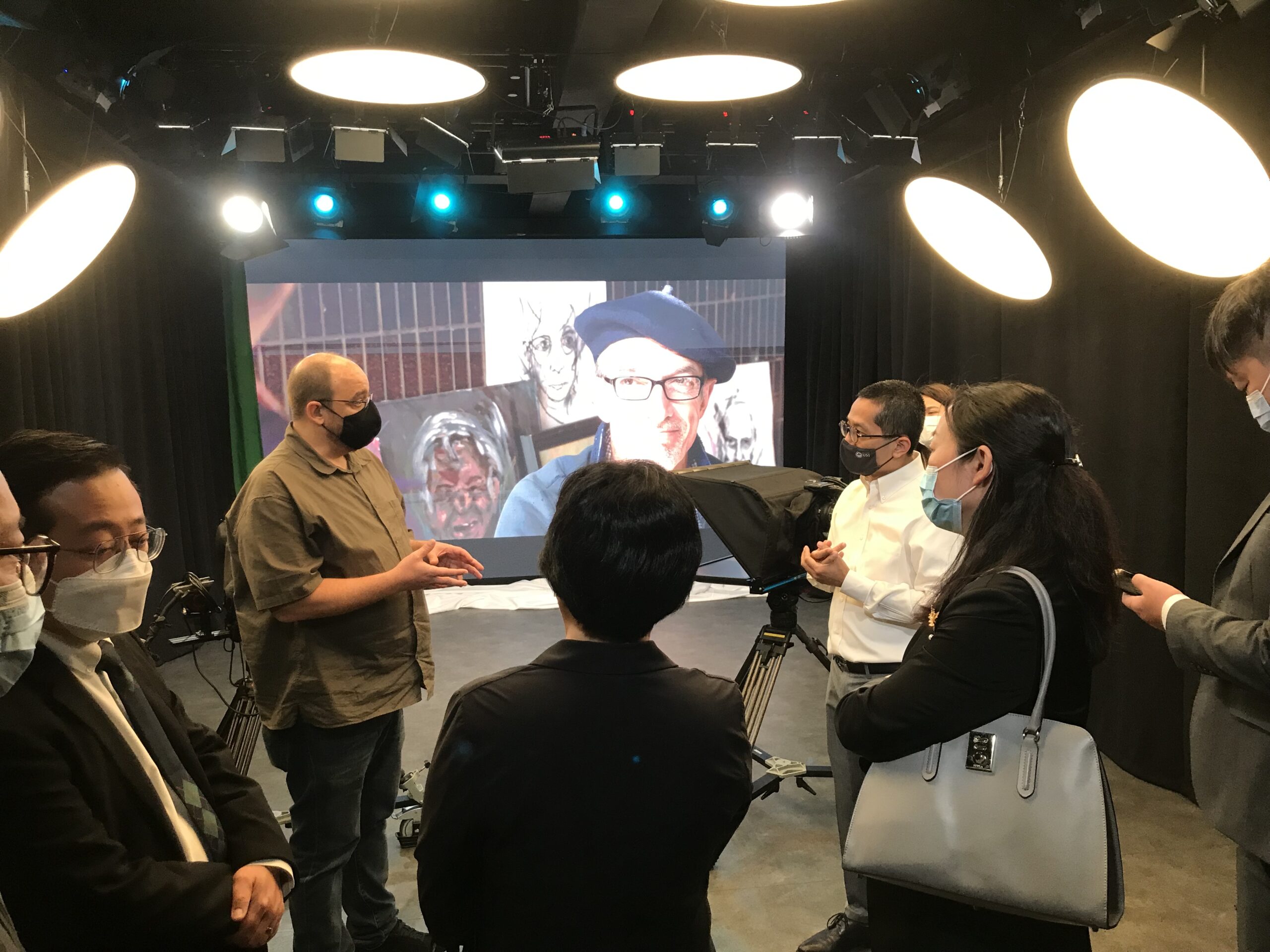 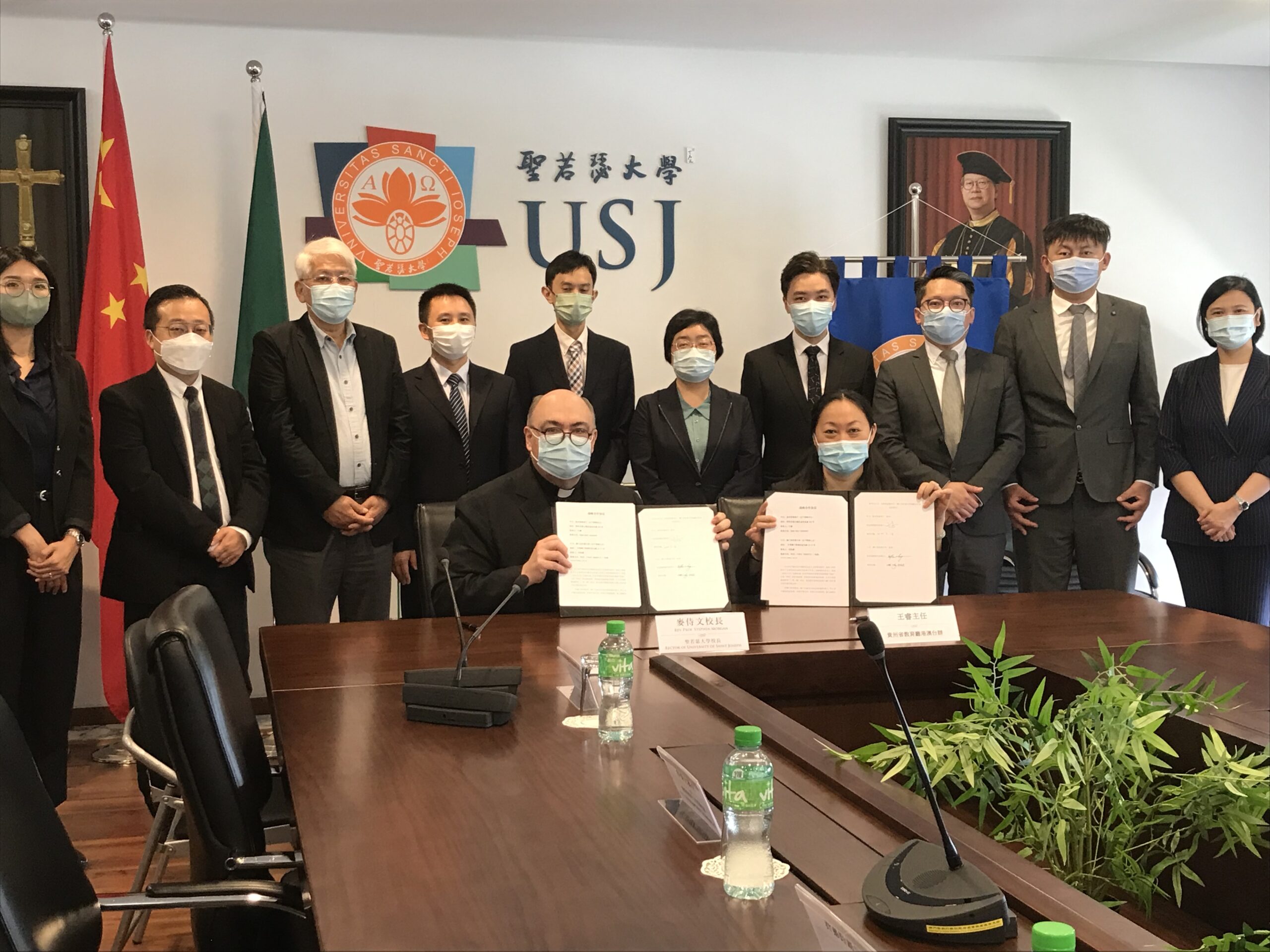 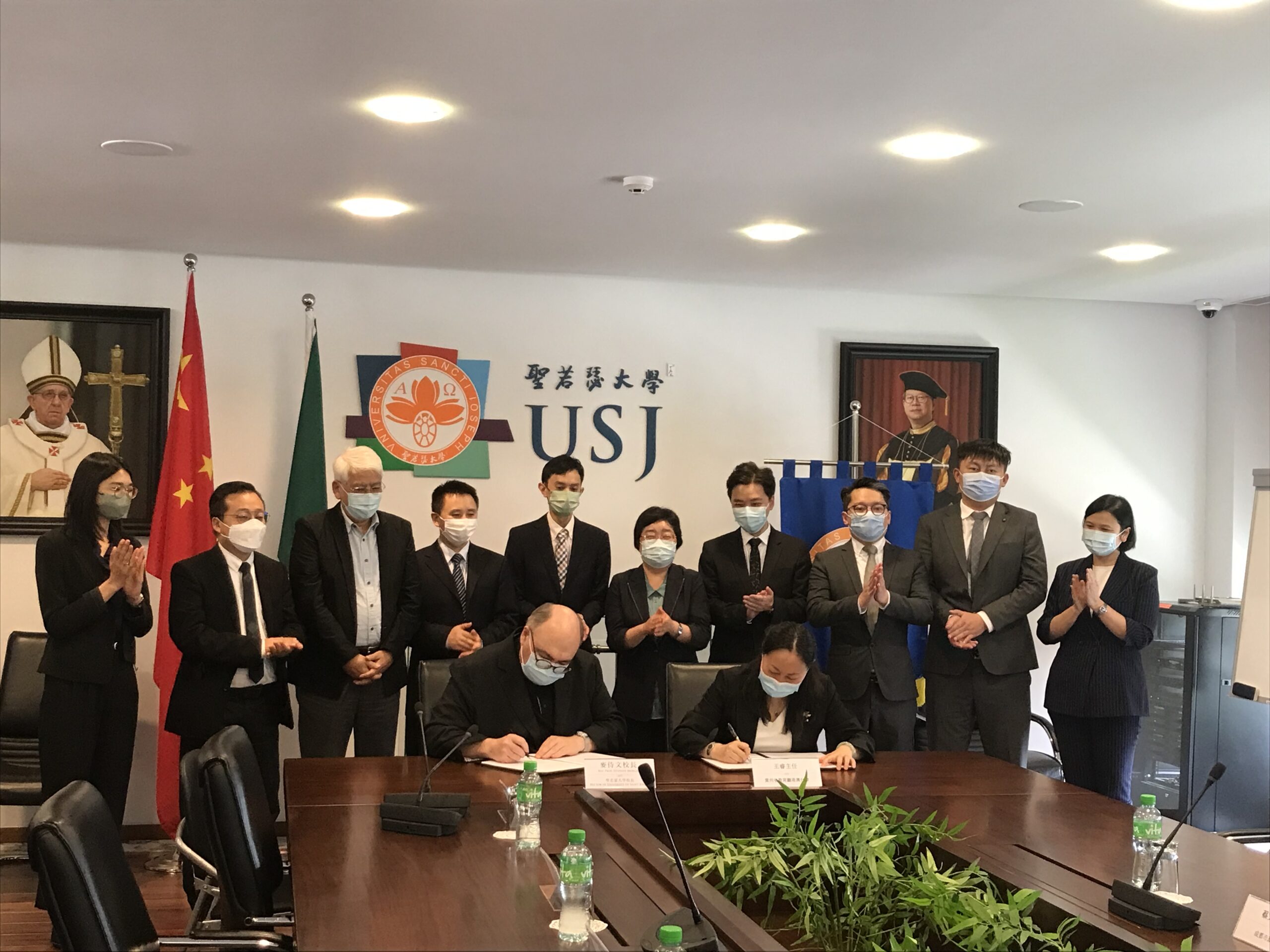 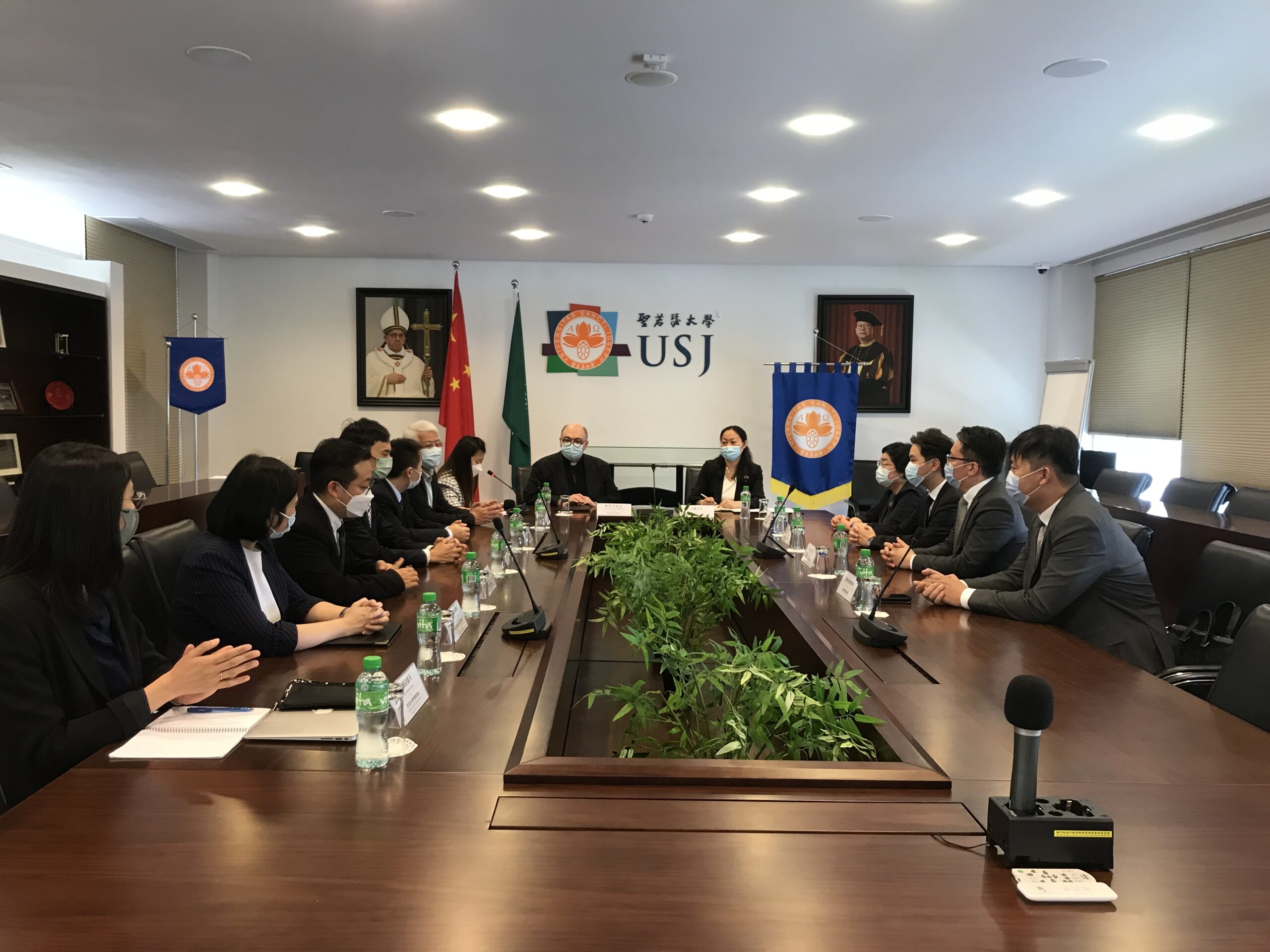