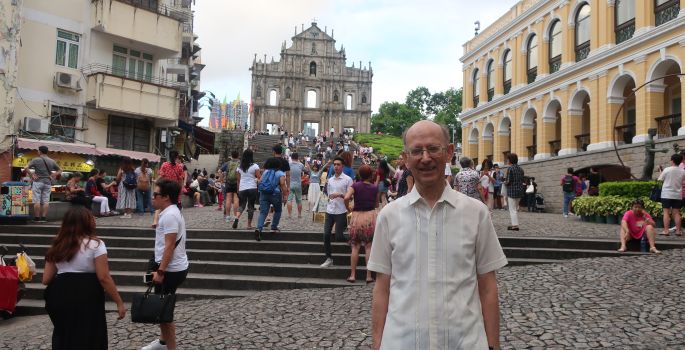 Fr. Matthias Christian SVD (田默迪) passed away today July 22nd 2020 in Cardinal Tien Memorial Hospital in Taipei around noon time. He was born 1941 during the Second World War, in Grossarl, in the mountainous area of Salzburg, Austria. He entered the Minor Seminary Borromaeum in Salzburg, and in 1960 he joined the Divine Word Missionaries (SVD) in St. Gabriel, near Vienna, Austria. He was ordained to the priesthood in 1966 in St. Gabriel’s, Austria.

Fr. Matthias arrived in 1968 in Taiwan coming by ship, studied Chinese and finished a Master in Chinese Philosophy at Fu Jen Catholic University. The Chinese Catholic convert, philosopher, lawyer, and diplomat John Wu Ching-Hsiung 吳經熊 (1899-1986) became his main partner of dialogue. Fr. Matthias wrote his Doctorate in Philosophy on John Wu entitled “Philosophy of Law Beyond East and West: A Comparative Analyses of the Early Thoughts in Philosophy of Law of John C. H. Wu / 東西方之間的法律哲學：吳經熊早期法律哲學思想之比較研究” (University of Vienna, 1986). For many years Fr. Matthias taught at Fu Jen Catholic University and served in Campus ministry, always eager to dialogue with Chinese people and traditions in order to deepen mutual understanding and respect.

In 2008, he was called to Macau to teach philosophy and core modules at the Inter-University Institute (IIUM) as full-time staff of FRS. After becoming Emeritus at USJ in 2014, he was asked by his General Superior in Rome to go to Juba, South Sudan, to teach philosophy in more dangerous circumstances. Fr. Matthias was always ready to take on new challenges as a missionary. He retired to Taiwan in 2016, continuing to offer lectures as Sinologist and philosopher, and to serve in a small parish in Taipei. In 2017 he suffered a severe operation on his lungs. Although he never fully recovered from his sickness, he continued to give talks at universities and served the people of his parish.

“I am a catholic priest and missionary who lived more then forty years in study and dialogue with Chinese culture and people. Though I am an Austrian and love my country, I feel at the same time a deep concern for China, its people, and its great tradition as if it were my own homeland.” Fr. Matthias was deeply convinced of the profound relevance of the Gospel for China, but similarly of the relevance of China for world and Church, beyond East and West.

May the Lord of Life reward him with eternal peace.