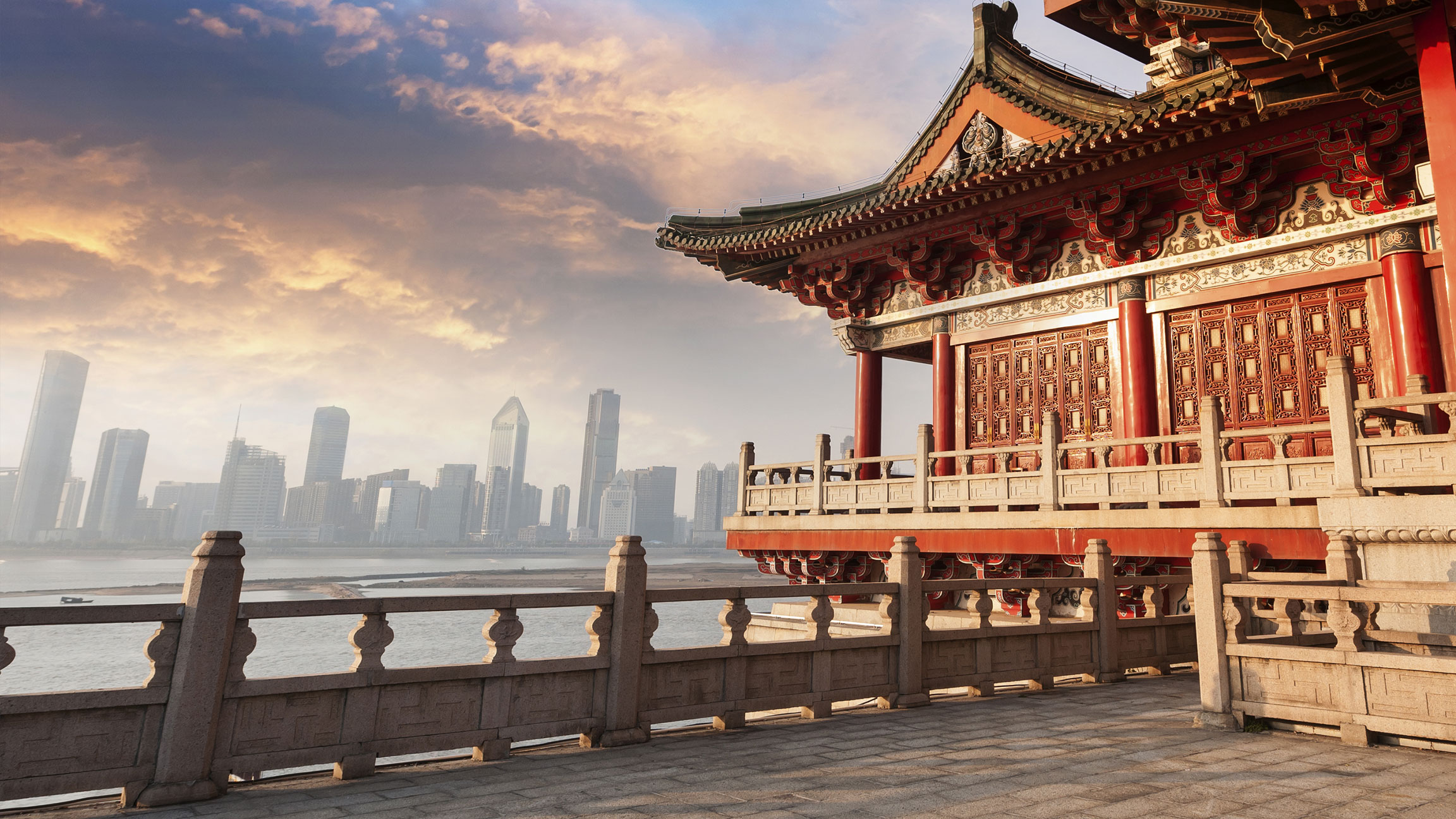 The Xavier Research Centre for Memory and Identity will hold two Public Seminars on 7 November 2022 titled “Ghosts, Urbanization and Strangers in China and Hong Kong”, and “Chinese Village Life Today. Building Families in an Age of Transition”.

This is the second seminar in the series Bridges co-organized by Xavier Research Centre for Memory and Identity of the University of Saint Joseph and Instituto do Oriente, ISCSP, University of Lisbon. The objective of the seminars is to stimulate intellectual exchanges between scholars in Macau (China) and Portugal on topics related to cultural sustainability.
The overarching theme of the second seminar is Transitions.

Ghosts, Urbanization and Strangers in China and Hong Kong

Belief in ghosts is often thought of as a relic of the past—an outmoded belief linked to the traditional cultures of rural China.  But ghost stories are commonplace in Hong Kong and other large Chinese cities and evidence of the fear of ghosts can be found in the ways that modern urban people treat death, funeral homes, and cemeteries. This talk analyzes belief in ghosts as a facet of modern, urban living. I suggest that traditional Chinese beliefs about ghosts have transformed rather than diminished as China has urbanized, and that modern urbanites may harbor more fear of ghosts than anyone did in the past.

Andrew Kipnis is a Professor of Anthropology at the Chinese University of Hong Kong. His research involves social, cultural and political change in contemporary China. He is currently working on several projects, including one that focuses on the problem of how to dispose of cremains in large East Asian cities. He has recently completed a book that uses the funeral sector as a lens for understanding urbanization in China, and has previous written books about processes of urbanization in a mid-sized Chinese city, educational desire and governing, the implications for anthropological theory of issues that arise in the governing of socialist states and patterns of gift giving and social exchange in rural China. From 2006-2015 he was co-editor of The China Journal and is currently coeditor of the journal Hau: Journal of Ethnographic Theory.

When Chinese anthropologist Xiaotong Fei first published Peasant Life in China in 1939, the title of the book was meant to capture the rustic, earthbound orientation of Chinese civilization. Today, the title of Fei’s book no longer does justice to a society that has become largely dominated by urban development, but a significant portion of China’s population still lives in rural areas. Many rural residents are traveling regularly to the city to gain better access to jobs, health care, and consumer goods, and this cyclic transit and engagement with new urban discourses, technologies, and medical practices is transforming village life. In a recent book entitled Chinese Village Life Today, I analyze many of these transformations drawing on more than two decades of field research in one rural township in Guangdong Province, north of the industrialized Pearl River Delta region. The book considers the intimate choices of village families in the face of larger forces of modernization, showing how these negotiations shaped the configuration of daily village life, from marriage to family planning, from childbirth to childcare, from public sanitation to popular religion. In this talk, I will focus only on the reconfiguration of women’s birthing experiences, highlighting some of the tensions and frictions shaping the current age of transition, an age of increasingly far-reaching technocratic interventions in the conduct of everyday life.

Gonçalo D. SANTOS is an anthropologist and a leading international scholar in the field of China studies. His research explores new approaches to questions of modernity, subjectivity, and social, technological, and ecological transformation in contemporary China. He is an auxiliary professor of socio-cultural anthropology in the Department of Life Sciences at the University of Coimbra. He is also the Coordinator of the Research Cluster “Technoscience, Society, and Environment” at CIAS—Research Centre for Anthropology and Health, University of Coimbra. Prior to joining the University of Coimbra in 2020, he held positions at the London School of Economics, the Max Planck Institute for Social Anthropology, and the University of Hong Kong. He is the author of Chinese Village Life Today (University of Washington Press, 2021) and the co-editor of Transforming Patriarchy (University of Washington Press, 2017). His research has been published in leading scientific journals in the fields of anthropology, science and technology studies, and Asian studies. He is a member of the Research Group on Culture and Society, Initiative for U.S.-China Dialogue on Global Issues, at Georgetown University, and is the founder and the director of Sci-Tech Asia, a transnational research network that focuses on the relations between technoscience, politics, and society in Asia and around the world.

Organised by: Xavier Research Centre for Memory and Identity (USJ) , Instituto Oriente, and University of Lisbon.

Moderated by: Prof. Denis Zuev, Director of the Xavier Research Centre for Memory and Identity 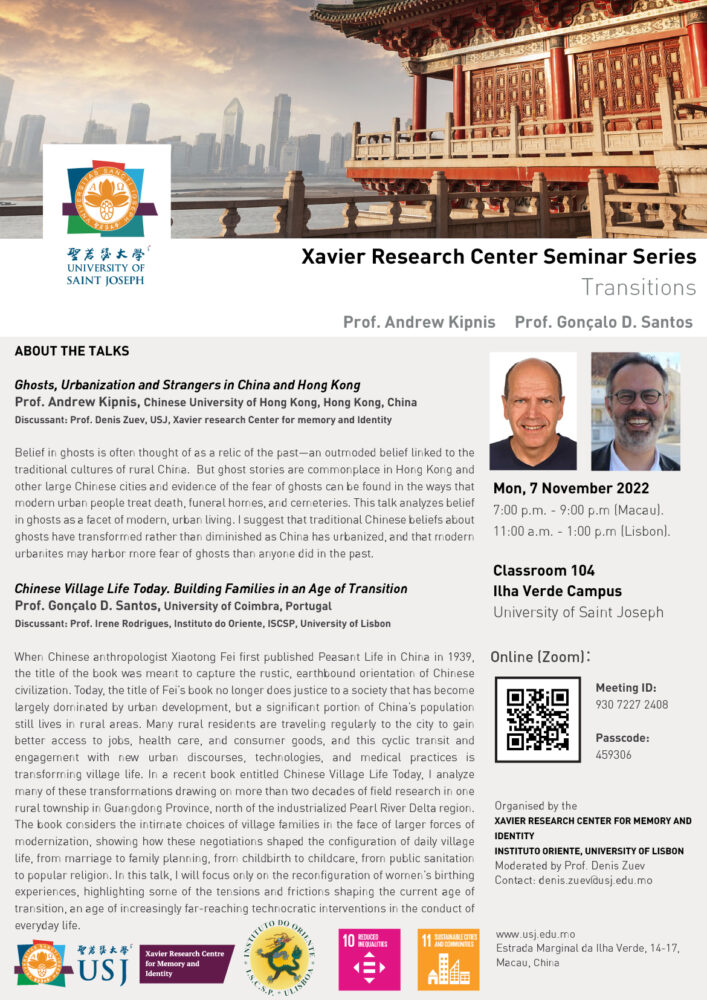