On 24 October 2019, USJ’s Institute of Science and Environment is organising a Public Lecture titled “Standing on Peak 1844: The Case of the Northern Sierra Madre Natural Park Northeastern Philippines” by Prof. Roberto R. Araño. 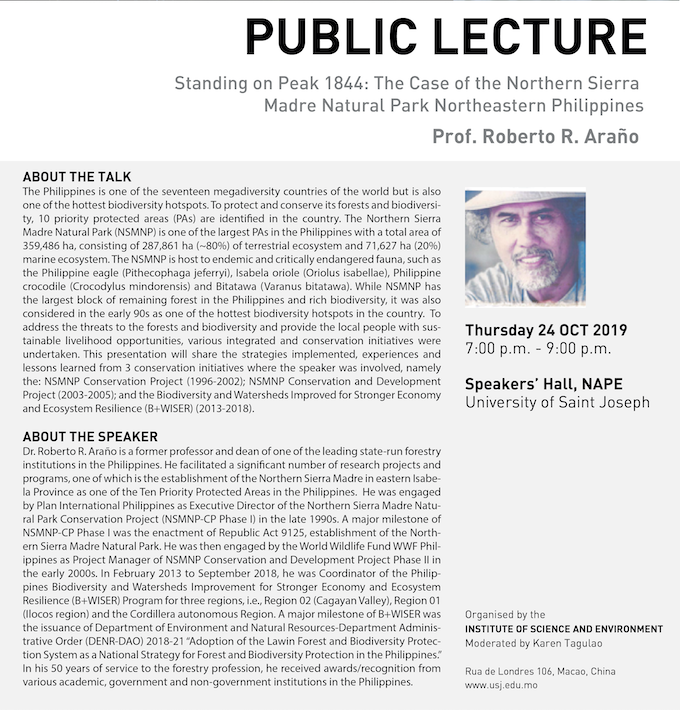 The Philippines is one of the seventeen megadiversity countries of the world but is also one of the hottest biodiversity hotspots. To protect and conserve its forests and biodiversity, 10 priority protected areas (PAs) are identified in the country. The Northern Sierra Madre Natural Park (NSMNP) is one of the largest PAs in the Philippines with a total area of 359,486 ha, consisting of 287,861 ha (~80%) of terrestrial ecosystem and 71,627 ha (20%) marine ecosystem. The NSMNP is host to endemic and critically endangered fauna, such as the Philippine eagle (Pithecophaga jeferryi), Isabela oriole (Oriolus isabellae), Philippine crocodile (Crocodylus mindorensis) and Bitatawa (Varanus bitatawa). While NSMNP has the largest block of remaining forest in the Philippines and rich biodiversity, it was also considered in the early 90s as one of the hottest biodiversity hotspots in the country. To address the threats to the forests and biodiversity and provide the local people with sustainable livelihood opportunities, various integrated and conservation initiatives were undertaken. This presentation will share the strategies implemented, experiences and lessons learned from 3 conservation initiatives where the speaker was involved, namely the: NSMNP Conservation Project (1996-2002); NSMNP Conservation and Development Project (2003-2005); and the Biodiversity and Watersheds Improved for Stronger Economy and Ecosystem Resilience (B+WISER) (2013-2018).

Dr. Roberto R. Araño is a former professor and dean of one of the leading state-run forestry institutions in the Philippines. He facilitated a significant number of research projects and programmes, one of which is the establishment of the Northern Sierra Madre in eastern Isabela Province as one of the Ten Priority Protected Areas in the Philippines. He was engaged by Plan International Philippines as Executive Director of the Northern Sierra Madre Natural Park Conservation Project (NSMNP-CP Phase I) in the late 1990s. A major milestone of NSMNP-CP Phase I was the enactment of Republic Act 9125, establishment of the Northern Sierra Madre Natural Park. He was then engaged by the World Wildlife Fund WWF Philippines as Project Manager of NSMNP Conservation and Development Project Phase II in the early 2000s. In February 2013 to September 2018, he was Coordinator of the Philippines Biodiversity and Watersheds Improvement for Stronger Economy and Ecosystem Resilience (B+WISER) Program for three regions, i.e., Region 02 (Cagayan Valley), Region 01 (Ilocos region) and the Cordillera autonomous Region. A major milestone of B+WISER was the issuance of Department of Environment and Natural Resources-Department Administrative Order (DENR-DAO) 2018-21 “Adoption of the Lawin Forest and Biodiversity Protection System as a National Strategy for Forest and Biodiversity Protection in the Philippines.” In his 50 years of service to the forestry profession, he received awards/recognition from various academic, government and non-government institutions in the Philippines.