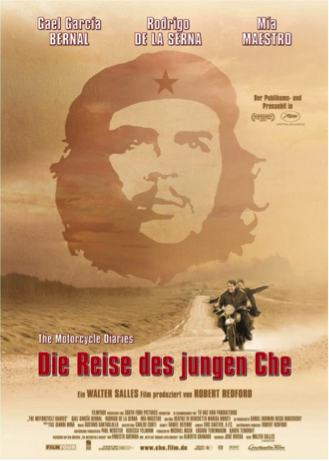 Spanish with Chinese Subtitle｜126 mins｜Director: Walter Salles｜Award: Best Achievement in Music Written for Motion Pictures, Original Song of the Academy Awards, 2005, USA; Technical Grand Prize, Prize of the Ecumenical Jury and François Chalais Award of the Cannes Film Festival, 2004; Best Film not in the English Language of the British Academy of Film and Television Arts (BAFTA), 2005; Best Screenplay – Adapted of the Goya Awards, 2005

Story: In 1952, two young Argentines, Ernesto Guevara and Alberto Granado, set out on a road trip to discover the real Latin America. Ernesto is a 23-year-old medical student specializing in leprology, and Alberto, 29, is a biochemist. The film follows the young men as they unveil the rich and complex human and social topography of the Latin American continent.With a highly romantic sense of adventure, the two friends leave their familiar surroundings in Buenos Aires on a rickety 1939 Norton 500. Although the bike breaks down during the course of their eight-month journey, they press onward, hitching rides along the way. As they begin to see a different Latin America in the people they meet on the road, the diverse geography they encounter begins to reflect their own shifting perspectives.They continue to the heights of Machu Picchu, where the majestic ruins and the extraordinary significance of the Inca heritage have a profound impact on the young men. As they arrive at a leper colony deep in the Peruvian Amazon, the two are beginning to question the value of progress as defined by economic systems that leave so many people beyond their reach. Their experiences at the colony awaken within them the men they will later become by defining the ethical and political journey they will take in their lives. Story: Ten years after looking into the eyes of his father’s killer, a young man is on the hunt for the gang of outlaws that left him fatherless. With just a sketch of their faces he travels from town to town taking up odd jobs in exchange for shelter. Until one day the marauding gangs’ leader sets foot on the property he is staying at, igniting an undeniable urge to satisfy his vengeance. Hunting down each man, one by one, he’ll take his justice no matter the consequences!
Pescador｜The Fisherman｜漁夫｜(Ecuador) Story: Blanquito is a young fisherman in ‘El Matal’, a small village on the Ecuadorian coast. He dreams of leaving the village in search of his father. He is obsessed with Lorna, who lives alone in a luxurious house on the beach shore. One morning a series of wooden boxes appear on the beach. They’ve been dragged by the tide, filled with cocaine. Instead of selling the drug back to the drug traffickers, like everybody else in the village, he decides to follow his dream and starts a journey, accompanied by Lorna and the packages, that will let him discover his own spirit. Story: Rodencia y El Diente de la Princesa is a 3D Animation Film: A magical adventure begins once upon a time, within a vast and wild forest there was a fantastic Kingdom called Rodencia, a place where wonderful creatures and powerful wizards lived. It’s the story of adventures and love of a small mouse called Edam, a clumsy magician’s apprentice and the beautiful and confident mouse Brie, who will have to face many dangerous obstacles in order to obtain the power of the princess’s tooth and defeat the troop of rats commanded by the evil Rotex who invades Rodencia (the peaceful kingdom of mice), in order to dominates them and takes their treasure. In the middle of the forest, the magic of the light and the darkness, the love and resentment will come together. Edam and Rotex will fight and only one will leave victorious.
Habanastation｜哈瓦那車站｜(Cuba) Story: A experiences of two classmates during May 1: a story that reveals different sides of the Cuban reality, from the everyday life of a couple of kids in Havana today. Ink is a slum imaginary name, next to the Plaza of the Revolution. This will be the main stage where Mayito, a well-behaved boy, discovers another Cuba well away from his luxurious home in Miramar, and where his fellow schoolmate Carlos lives. After getting lost during the May Day Celebration, Mayito comes by accident to this peripheral community and has hitherto found it totally alien…..