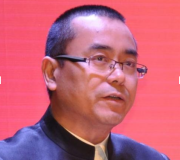 He worked as an architect from 1989 to 2004. Teaching at the Shunde Polytechnic since 2005, he became a professor of the School of Design in 2009 and the dean of the School of Design in 2014. He also works as the Chief Architect of Shenzhen Civil Engineering Tongji Architectural Design Institute, a master supervisor of City University of Macau, a doctoral supervisor of Burapha University in Thailand, a member of Art Design Teaching Steering Committee of Vocational Education of the Ministry of Education, the Deputy Director of Design Committee of China Building Decoration Association, the Vice President of Guangdong Decorative Association, and the Vice President of Guangdong Furniture Association.

Professor Meikang Yao‘s research interests lie primarily in the fields of architectural design and theory, urban planning and design, and landscape and environmental art design. He has led 5 national research programs, written and edited 5 textbooks, and published 25 papers. As an architect, he has hosted and designed 105 architecture projects across China.