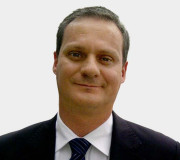 João Francisco Pinto is TDM’s Portuguese News and Program Controller – a position he has held since 2005. His career spans 30 years, during which time he has worked as a newspaper, radio and TV journalist. Prior to joining TDM in 1994, he was editor in Diário Económico – the Portuguese leading financial newspaper – and editor in chief of a local radio station in the outskirts of Lisbon.

Over the past 30 years, he has also been been as the Asia correspondent for several Portuguese newspapers and TVs, as well as Asian Affairs’ commentator for several European broadcasters. Currently, he is also the General Assembly Chairman of the Portuguese and English Press Association of Macau and served President of the Rotary Club of Macau for the Rotary Year 2020/2021.

In recent years he worked closely with several international broadcast and media organizations such as Asia Pacific Broadcast Union (ABU), Asian Institute for Broadcasting Development (AIBD), and Public Broadcasters International (PBI). João Francisco Pinto has a degree in economics and several courses on journalism taken in Portugal, Macau and the US.