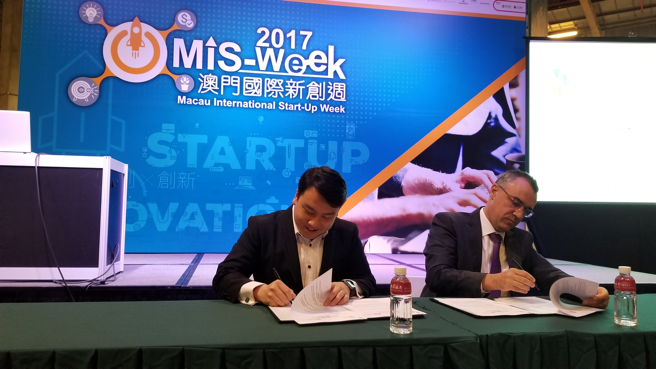 The Macao International Startup Week 2017 saw more than 60 international speakers featured in two main forums with over 80 organisations including Banks, Universities, Incubators and companies from around the region to promote entrepreneurship and innovation.

During the event, USJ also signed an MOU with Macao Zhongshan Junior Chamber of Commerce, which solidifies an ongoing relationship between the two parties. By combining the academic theory and business practices of the two parties, the cooperation hopes to maximize the use of the talent resources, scientific research and technologies of both parties to improve both academic research and performance of core competencies between the parties involved.  In doing so, maximize the full potential and competitive advantage of University of Saint Joseph in the study and research in the areas of Portuguese Culture and language, Religious Studies in connecting the Portuguese-speaking countries and linking talent and entrepreneurs from Portuguese Speaking Countries into Macao and the Guangdong-Hong Kong-Macao Greater Bay Area via the development of an university startup base. During the week, USJ School of Business was well received with Professor Jose Alves and Professor Joao Alex Lobo Marques giving talks during the Start Up Forums held on 25th November 2017.

The event also saw many students interested in knowing more about USJ programmes and future innovative and entrepreneurial programmes.