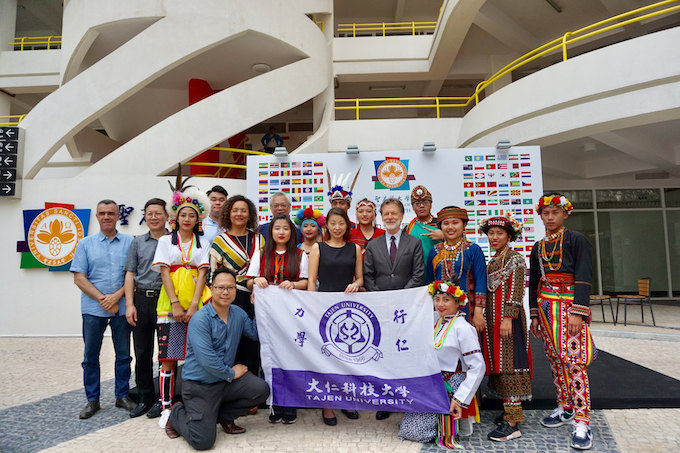 Students from the Minzu University of China in Beijing and Tajen Univeristy of Taiwan visited University of Saint Joseph as part of the 2018 Ethnic Minority Culture Week, which is scheduled this year from May 2ndto May 9th2018.  The delegation of students represented 10 different ethnic minorities from Mainland China and 5 ethnic minorities from Taiwan.  The welcoming committee included USJ Rector Professor Peter Stilwell, Vice Rector Professor Vincent Yang and Registrar Professor Jenny Lao-Phillips, whom explained the long tradition of USJ in Macau and historical ties with Mainland China and Taiwan.  In addition, Professor Alan Baxter, Dean of Faculty of Humanities extended his invitation for students to join us for their studies at USJ in the future.

Later, the students and staff of USJ performed a Chinese Dance and Portuguese Folk Dance respectively with the support of “SHANG AO” Education Centre and “Coração no Macau” to demonstrate that Macau is a special place where all cultures both local and international alike can coexist in harmony and thrive.  The students also toured the various facilites of the university which included the Faculty of Creative Industries and participated in a class in the Faculty of Social Sciences.

The activities will continue throughout this week with dance performances in the Leal Senado Square and also the opening of the Ethnic Minority FashionPhoto Exhibition at the Bank of China Building on Saturday May 5th 2018 at 11:30am.

For more information on ethnic minority culture you can visit the links below.