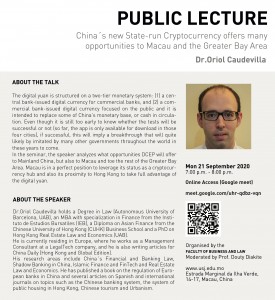 In April, after several years of work, the Chinese Government announced the starting of the tests of DCEP (“Digital Currency Electronic Payment”) in four major cities (Shenzhen, Suzhou, Chengdu and Xiong’an). DCEP is Beijing´s attempt to create its own world-leading and government-ruled digital currency (while trying at the same time to maintain control over the types of digital or cryptocurrencies traded within China).

Even though it is still too early to know whether the tests will be successful or not (so far, the app is only available for download in those four cities), if successful, this will imply a breakthrough that will quite likely by imitated by many other governments throughout the world in these years to come.

In this seminar, I will analyze what opportunities DCEP will offer to Mainland China, but also to Macau and toe the rest of the Greater Bay Area. Macau is in a perfect position to leverage its status as a cryptocurrency hub and also its proximity to Hong Kong to take full advantage of the digital yuan.

He used to live and work in Hong Kong, where
he was visiting fellow at the Asian Institute of International Financial Law (AIIFL, HKU), at the Centre for Chinese Law (CCL, HKU) and at the Center for Financial Regulation and Economic Development (CFRED, CUHK).

Apart from that, he worked as a business analyst at a Hong Kong public listed company.

He is currently residing in Europe, where he works as a Management Consultant at a LegalTech company, and he is also writing articles for China Daily (Hong Kong and Global Edition).

His research areas include China´s Financial and Banking Law, Shadow Banking in China, Islamic Finance and FinTech and Real Estate Law and Economics. He has published a book on the regulation of European banks in China and several articles on Spanish and international journals on topics such as the Chinese banking system, the system of public housing in Hong Kong, Chinese tourism and Urbanism.