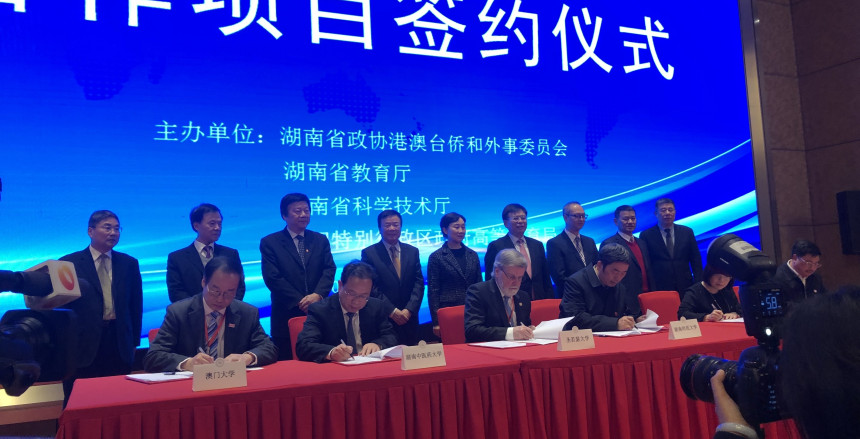 On December 12th, 2019, during a matchmaking meeting organised by the Macao Government’s Higher Education Bureau and the Hunan Province, USJ signed an MOU with HUNNU to strengthen collaborations.

On December 12th, 2019, during a matchmaking meeting organised by the Macao Government’s Higher Education Bureau and the Hunan Province, projects regarding institutional cooperation and innovation between both places were signed.

During the event, the Rector of the University of Saint Joseph (USJ), Prof. Fr. Peter Stilwell, and the Vice-President of the Hunan Normal University, Prof. Li Dazhi, signed a Memorandum of Understanding (MOU) to strengthen collaborations in different fields such as international tourism management, humanities and social sciences, further developing joint research and cultural programmes, as well as, among others, the establishment of science study centres.

Macao has always been a significant strategic cooperation partner of Hunan Province as the platform between China and the Portuguese-speaking countries and, also, a platform for internationalisation. In recent years, cooperation has been diversified and enhanced among the government, institutions and enterprises. Both places have intensive cooperation and exchange in trading and education. Currently, there are approximately 133 Macao students in Hunan Province.