Public Seminar: Macau as a Center and Support for Linguistic Training ‒ A Comparative Overview on Missionary Work

USJ Language and Linguistics Public Seminar: "Macau as a Center and Support for Linguistic Training ‒ a Comparative Overview on Missionary Work" on the 12th of May 2021.

Since the middle 0f the 16th century, Macau has been linked to the production of Western knowledge on China, deserving a place in the world’s sinology. A repository of knowledge, scholarship and linguistic expertise was accumulated in the city during centuries, being also networked to other centers of Chinese expertise. This repository is a multi-national, multi-cultural, multi-ethnic and multi-linguistic legacy produced by diverse kinds of men, Westerners and Asians, from the celebrated Jesuit and early Protestant missionaries to the common sailor and adventurer linked to Macau. It is a legacy that that has contributed to making Macau a vital point of Western interaction with China.
From a historical perspective, this presentation offers notes on a comparative overview of missionary language training and linguistic work in the 16th, 17th, 18th and early 19th centuries, discussing a neglected similarity of strategies towards China used by both early Roman Catholic and early Protestant missionaries. These two missionary endeavours constituted two initial moments of Western direct interaction with China, two different steps towards globalization that have much more in common than it seems at first sight, something is not usually noticed by the related literature.

Tereza Sena is presently Adjunct Senior Research Fellow at the Xavier Research Centre for Memory and Identity (XRCMI), Faculty of Humanities, University of Saint Joseph, developing research related to the Jesuit China Mission in the late seventeenth century. Since 1988 she has devoted herself to the study of the historiography and history, culture and literature of Macau, including themes such as political autonomy; history of translation, the citys intermediary role in the international trade of South China; foreigners at Macau; Macau’s Cemeteries; Macau-Siam relations; missionary activity in China, and Siam and continental Southeast Asia. Her academic activities have a strong international dimension, having involved several research projects, lecturing and publishing extensively (over 60 titles), in Macau, China, Portugal, USA, Germany, Italy, Thailand, Hong-Kong, Japan, Poland and Hungary. For her research, she has won three awards: in Portugal (1994, 1st prize) and Macau/PRC (2015 and 2018, Merit Prize, for a Monograph study). 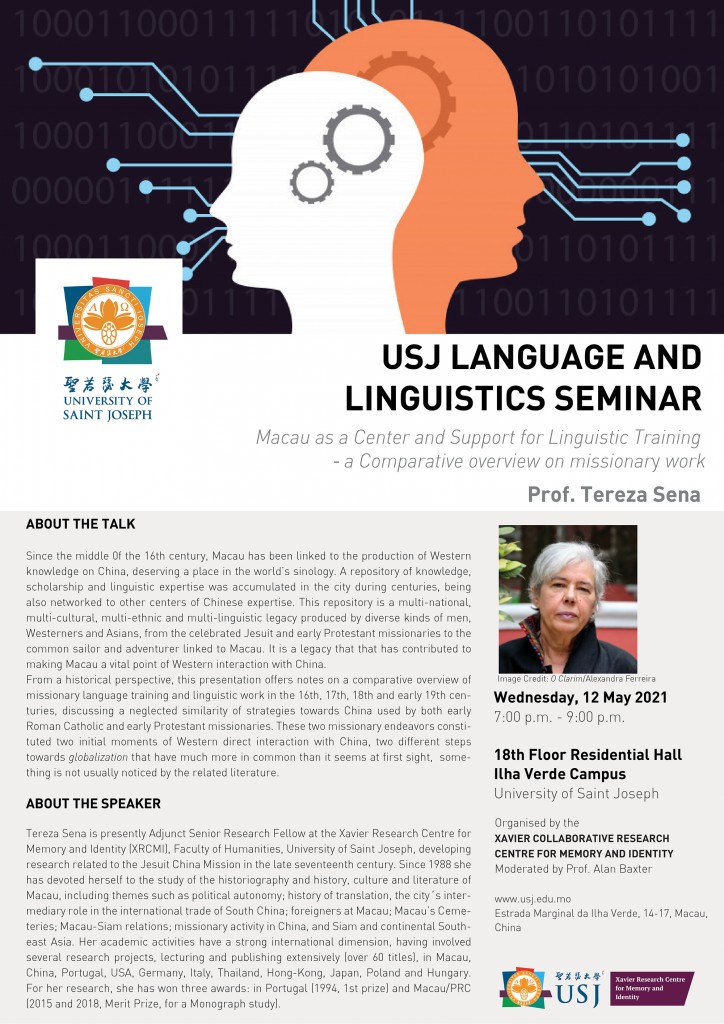