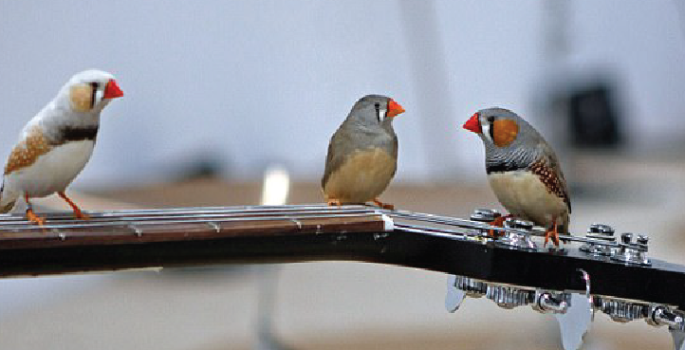 On 23 May 2019, USJ's Institute of Science and Environment is organising a public lecture titled "Empirical and theoretical studies of mate-choice copying" 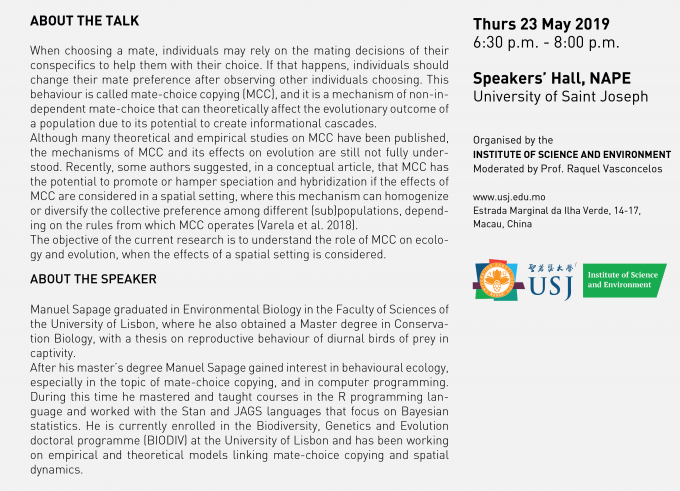 When choosing a mate, individuals may rely on the mating decisions of their conspecifics to help them with their choice. If that happens, individuals should change their mate preference after observing other individuals choosing. This behaviour is called mate-choice copying (MCC), and it is a mechanism of non-independent mate-choice that can theoretically affect the evolutionary outcome of a population due to its potential to create informational cascades.

Although many theoretical and empirical studies on MCC have been published, the mechanisms of MCC and its effects on evolution are still not fully understood. Recently, some authors suggested, in a conceptual article, that MCC has the potential to promote or hamper speciation and hybridization if the effects of MCC are considered in a spatial setting, where this mechanism can homogenize or diversify the collective preference among different (sub)populations, depending on the rules from which MCC operates (Varela et al. 2018).

The objective of my current research is is to understand the role of MCC on ecology and evolution, when the effects of a spatial setting is considered. To achieve this goal, I am creating individual-(or agent-) based models to simulate the evolution of a population in such systems, and I am also planning to do some empirical research to validate the theoretical models.

Manuel Sapage graduated in Environmental Biology in the Faculty of Sciences of the University of Lisbon, where he also obtained a Master degree in Conservation Biology, with a thesis on reproductive behaviour of diurnal birds of prey in captivity.

After his master’s degree Manuel Savage gained interest in behavioural ecology, especially in the topic of mate-choice copying, and in computer programming. During this time he mastered and taught courses in the R programming language and worked with the Stan and JAGS languages that focus on Bayesian statistics. He is currently enrolled in the Biodiversity, Genetics and Evolution doctoral programme (BIODIV) at the University of Lisbon and has been working on empirical and theoretical models linking mate-choice copying and spatial dynamics.